The Rise of BlackBerry? 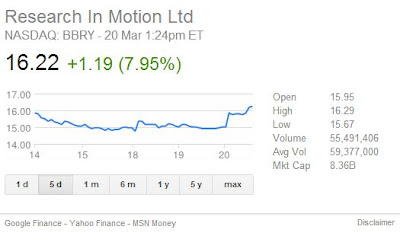 Now that we are just about 1 or 2 days away from the launch of Blackberry Z10 in United States, coupled with the release of WhatsApp for BB10, in fact they just updated today... things are looking bright for BlackBerry!

Below is the Founder of CrackBerry and he is there, ready for the launch at NYC...


It is quite a rare thing now even in my office to still see people using BlackBerry, where many of them had abandoned ship either to iPhone or Samsung Note 2 or S3... as of now I yet to see anyone using Windows Phone 8! =p Currently with just 2 BlackBerry Z10 in office, will there be more? I for one, honestly would love to get one and tempted even to buy one without contract (Kasia Mobile selling for $790)... but sadly, I need to wait for another 3 more months before I am eligible to re-contract under Starhub. Yes, it is weird of me, a tech guy, will still remain faithful or plain stupid, subjecting myself to mockery by my own fellow colleage and still want to get BlackBerry device. I have no idea why but maybe I just want to be different? Not to be part of the iSheep or the domineering Samsung. or rather Google Android devices. Perhaps to me, it is down to what really matters, messaging, phone call, decent multi-media features like music player, video recording, camera and social media! Which I think BlackBerry are capable of doing just that. Of course! Android devices and iPhone can do better... but most of the users I know, used them to play time wasting games which I don't want to get myself into that situation.

Take for example. my recent Hong Kong trip, all those who went with me were busy playing their Candy Crush game while I myself just sitting or standing, looking at them. Haiz... =p

Well, I will not go into details why BlackBerry 10 are better in some ways or to say how some iPhone or Android users switch over to BBZ10... It has been reported that Z10 which has already been on sale in the United Kingdom for roughly seven weeks, two thirds of all Z10 customers were previous BlackBerry owners, while the other third was evenly split between people who’d owned an iPhone or Android phone.

BlackBerry, I admit, still got a long way to go to beat her competitors. As a matter of fact, they are struggling to be No.3!

I just hope, this is not the beginning of the end but rather of something better to come... for BlackBerry!

To end off, I would like to share what Frank Boulben, Chief of Marketing for BlackBerry said during his phone interview with Forbes.

"What does BlackBerry’s Z10 have that’s better? It’s all about the BB10 operating system, says Boulben. “It’s about multi-tasking and being always-in,” says Boulben. “You don’t have to be in and out of application and communication services, and you can navigate on your device with one thumb in a very seamless manner.”

BlackBerry’s new smartphone is a tool, not a toy, he adds, suggesting that BB10 features like Hub and BlackBerry Flow pose a new “paradigm” for smartphones, a next step up from the application grid introduced by the iPhone. That’s a bold statement, considering the next big shift for smartphones will probably involve wearable devices of some sort, or at least a significant change in form factor and services.

Perhaps that plays to BlackBerry’s advantage. Smartphones are still rectangular slabs of plastic and metal, which means a vendor’s canvas for innovating is still on the screen, in the software. That’s where BlackBerry has put most of its efforts, incorporating a smarter keyboard that uses technology from SwiftyKey, live-screen sharing and Skype-like video calling through BlackBerry Messenger (BBM)." 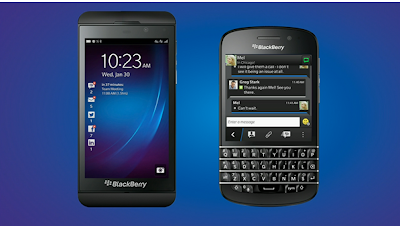