Life without Start Menu is terrible but there came Start8

Ever since I started using Windows 8 at launched, I struggled. Firstly because I am using a 3 years old laptop that obviously do not come with touch screen. I still use my mouse and keyboard to perform my normal operations and without Start Menu is just plain pain in the neck!


One expert also stated that removing Start Menu and removing the ability to boot to Desktop mode is a mistake:


"There were certain decisions that Microsoft made that were in retrospect flawed. Notably not allowing people to boot into desktop mode and taking away the start button. Those two things have come up consistently. We've done some research and people miss that.

And there are a lot of people that as soon as they boot into Windows 8, they go to desktop mode and do most their work there and occasionally back to Metro. But the point being they're much more comfortable with desktop mode." - IDC analyst Bob O'Donnell

As such, Microsoft causes me to pay a few bucks, just to reinstate my Start Menu & boot to Desktop mode to make my life back to normal! This software I purchased is Start8 and this is how my Start Menu look like... 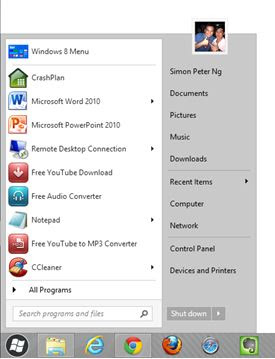 The free trial gives you 30 days to play around, tweak, and set everything up just the way you like it before asking you to purchase the full version for US$4.99. Do try it, especially if you are frustrated as I was.